Roku and Chromecast are two of the best streaming devices available, both vying for attention with impressive arrays of features. Over the years, both devices have gone through several generations, improving capabilities to reflect the latest standards.

At Smart Home News, we’ve thoroughly vetted and reviewed all the currently available Roku and Chromecast devices. So, which streaming device should you purchase — Roku or Chromecast? Read on and find out!

What is Roku? Overview of Roku Devices

Roku is one of the most popular entrants in the world of streaming devices and was one of the earliest. Roku prides itself on being unbiased and simple. You plug the device into your TV, connect to the internet, and voila! You have hundreds of streaming channels and apps at your fingertips.

As of writing, Roku has released a total of eight generations of streaming devices since its inception. However, Roku currently has four active streaming devices — Roku Express, Roku Premiere, Roku Streaming Stick+, and Roku Ultra. Roku Premiere has all the same features as the Roku Express, but with one significant improvement — 4K HDR support. As such, Roku Premiere is ideal for those who want the greatest video capabilities with bare-bones features.

Roku Streaming Stick+ goes one step beyond Roku Premiere by adding enhanced accessibility features to its remote. In addition to 4K HDR support, Streaming Stick+ has the latest smart TV features, including a remote with voice control. Roku Ultra is the most advanced Roku streaming device because it comes with advanced remote control. It is equipped with personalized shortcut buttons and complementary JBL headphones for private listening. Now that you have a brief understanding of the various Roku and Google Chromecast devices available, let’s see how they stack up against each other.

Installing a Roku is a piece of cake. You simply have to connect the Roku device to your TV, connect the TV to the internet, set up your Roku account, and get started!

All Roku streaming devices connect to your TV’s HDMI port and a separate outlet for power. You can connect the device to the TV’s USB port for power if it provides at least five volts of power. However, some older TVs don’t provide sufficient power, which means you may have to connect the streaming device to a separate power outlet via the wall adapter and USB extension cord that comes with the package.

After connecting Roku to your TV, turn your TV on, connect it to the WiFi network, and start the Roku setup. The process is pretty straightforward — follow the on-screen prompts and you’ll be set up in no time!

Setting up a Chromecast is also insanely easy. You have to connect the Chromecast to your TV’s HDMI port and USB outlet if the TV has enough power. If not, you can connect it to an external power outlet via the USB cord and wall adapter.

Roku is a traditional user interfaced-based streaming device, which means it comes with a built-in operating system — Roku OS. As such, once you install Roku, you access Roku’s internal operating system, complete with a menu, search items, apps, and other features.

Roku has an extremely clean and minimalistic user interface. All the menu items are lightweight, allowing your Roku OS to load fast even under weak internet connections. The menu features movies, shows, and apps in a systematic manner.

You can also customize the menu items to prioritize those that you prefer, and even follow specific movies, shows, directors, etc., so you get notified whenever new content comes out relating to those items. Roku OS also includes an Up Next section that displays all the upcoming episodes from shows you’re currently watching. 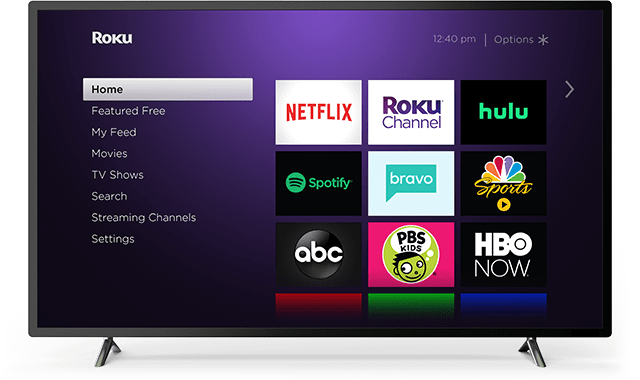 Chromecast isn’t a traditional streaming device with a built-in operating system and storage. Instead, Chromecast is a casting device.

As such, Chromecast doesn’t have a user interface to speak of — no menu items, search bars, or any of the other features available on other streaming devices. Instead, you have to play content on the Chromecast web or mobile platforms and cast it to your TV.

The Roku remote is relatively old-fashioned, with large clunky buttons that don’t look very attractive. It does, however, double as a TV remote, which means you can use the same remote for your TV and your Roku — at least for the basic functions of changing the volume or turning the power on/off.

The advanced remote controls (available with Streaming Stick+ and Ultra) also include a microphone button. This allows you to hold down the microphone button to navigate the Roku menu with voice search.

All Roku remote controls feature four shortcut buttons for apps like Netflix and other popular streaming services. The exact buttons included with the remote control may differ. As such, you can go to these channels and apps directly with a single button.

Roku Ultra comes with the most advanced shortcuts — two personalized shortcut buttons. As such, you can set those buttons to execute complex commands — such as finding content from a specific director or a specific app. Other Roku devices, however, don’t have customizable shortcut buttons.

Chromecast doesn’t come with remote control. As such, it doesn’t have any of the features the Roku remote control has, such as remote finder, microphone, shortcut buttons, etc.

Google has long argued that your phone is the most powerful and only remote you need. To that end, you’re supposed to treat your smartphone as a remote control.

However, if you’re desperate to use a traditional remote control, you may have one option. All modern TVs come with an HDMI-CEC feature that you can access through your TV’s settings, generally under the ‘external device’ section.

You can enable this feature and pair your Chromecast device to your TV’s existing remote control. As such, you’ll be able to use your TV’s remote control for basic things like play/pause content, fast forward, rewind, etc.

However, not all TVs have this feature, and it will be far more convenient to use your smartphone as a remote control, as Google wants you to.

In addition to the traditional remote control, you can also use Roku’s smartphone app as a second remote. You can seamlessly connect all of your Roku devices to your smartphone app, using it to control the media, playback, and all other features.

The Roku app also allows you to search for content using the phone’s keypad instead of the clunky TV keypad. You can also use the Roku trackpad to navigate between the menu items.

Roku’s smartphone app also acts as a mirroring tool. You can play content from your smartphone or tablet and cast it to your TV. This feature allows you to play media from your phone or web browser. It also allows you to cast your home videos and photos to your screen.

You can download the Roku app from the Google Play Store or Apple Store. As a casting device, you can cast content — such as home videos, photo galleries, and even a web browser — from your phone or computer to your TV. This allows you to watch everything on your TV. Not just streaming media, but everything — including home videos and videos on other websites!

As a streaming device, you can play Netflix, Hulu, Amazon Prime, or any other streaming platform on your phone and send it to your Chromecast. While streaming, however, the app doesn’t play the content on your phone and cast it to the TV because that would take up too much bandwidth and battery.

Instead, the phone simply acts like a remote, signaling to the Chromecast device that it should pull up the relevant streaming platform from the internet. Once the Chromecast pulls up the relevant streaming platform, you can navigate all the content on your screen and play it on your TV. However, you will still have to use your smartphone as a remote.

Even though Google Home is a pretty robust smartphone app, it doesn’t have all the features you may be accustomed to from traditional streaming devices. For example, Chromecast doesn’t have a private listening feature to let you listen to your TV through headphones.

You can download the Google Home app from the Google Play Store or Apple Store. Roku devices are compatible with Google Home and Amazon Alexa devices. As such, you can pair your Roku to an external voice assistant, and then provide commands, such as “Hey Google, open Netflix on Roku.”

Google Chromecast is fairly limited in its voice controls. Since it doesn’t have a remote control, you can’t use the remote's microphone. You can, however, use the microphone button in the Google Home app to control your Google Chromecast.

Furthermore, since Google has its own smart speaker and smart assistant, you’re also limited in terms of voice assistant compatibilities. Google Chromecast only connects to other Google Assistants, such as the Google Home and Google Home Mini smart speakers. Roku vs. Chromecast Ease of Use

Chromecast is limited in its controls because you can only access it through Google voice assistants or the Google Home smartphone app. You don’t have a remote control. Furthermore, Chromecast is inextricably linked to your smartphone. Roku has a strong repository and knowledge base. The knowledge base has information on installing and setting up your device, account and billing issues, and troubleshooting issues. You can also contact live support for immediate help.

Chromecast has a really well-arranged repository of helpful troubleshooting information, guides, etc. However, contacting Google Chromecast support is a lot more challenging, and you don’t have access to live chat.

FAQs About Roku and Chromecast Devices

Do you need a VPN with your streaming devices?

Can you jailbreak Roku or Chromecast?

Jailbreaking is a process with which you can modify a device, such as your Chromecast or Roku, to bypass restrictions. Roku uses a closed operating system, so it’s jailbreak-proof. Chromecast, in comparison, can be jailbroken using third-party tools like Kodi and CRowns Lite.

How much do Roku and Chromecast cost per month?

Can you use Roku and Chromecast on the same TV?

You can connect both the Roku and the Chromecast to the same TV using different HDMI ports, but you’ll need to access the two separately.

How do I connect Chromecast to Roku?

Both Chromecast and Roku are input sources. As such, you can’t access the Roku interface or OS within Chromecast, or vice versa. However, you can access The Roku Channel through the web browser and cast it to your TV.

What is the primary difference between Roku and Chromecast?

The primary difference between Roku and Chromecast is in their core functionality. Roku works with a built-in operating system that you can navigate on your TV. Chromecast, however, doesn’t have internal storage or operating system, so you can only access it through your smartphone’s interface.

The Roku smartphone app has a mirroring feature, allowing you to mirror your phone on your TV. However, if you want to cast like Chromecast, you’ll need to install third-party applications like Miracast or DIAL (Discovery and Launch), allowing you to cast certain media platforms. However, the support for these third-party applications is limited, and you don’t get Chromecast’s wide accessibility with casting.